This Dazzling, Genuine "Difference" Now Where Shall It Go? 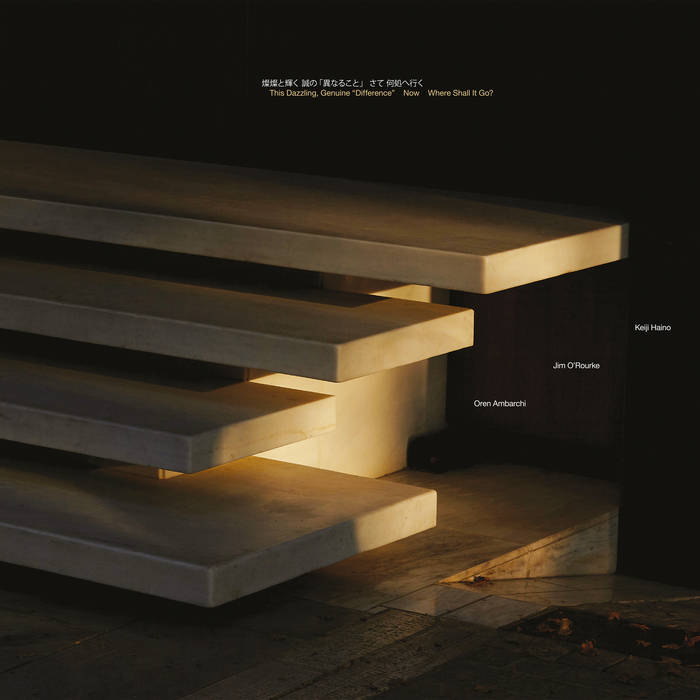 Over the course of four LP sides, the October 2014 concert documented here ranges from rock power trio dynamics to maelstroms of analog electronics. Once again, the three demonstrate their commitment to pushing into new areas of instrumental exploration and group interaction. Where their previous releases featured extended vocal workouts from Haino, his vocalizations here are restricted to the occasional impassioned cry, putting the focus squarely on instrumental interplay. More than ever before, this feels like the work of three equals, with O’Rourke or Ambarchi taking the lead role as often as Haino does. The four pieces presented here each focus on extended development.

The first side is propelled by Ambarchi’s busy, Jack DeJohnette-esque cymbal and tom work, which provides a skittering yet insistent pulse over which Haino and O’Rourke’s FX-saturated strings rise and fall, momentarily converging for passages of near stasis before wandering through areas of gently sour discord; O’Rourke’s use of a six-string bass here boosts the harmonic density of the music and often makes his contribution difficult to distinguish from Haino’s guitar. On the second side, O’Rourke uses his pedals to make his bass near unrecognizable, generating a squelching, harmonically unstable riff that Ambarchi accompanies with a semi-martial snare pattern. Haino moves between frenetic octave-doubled fuzz riffing and streams of feedback. The third side is the most abstract; Continuing Haino’s explorations of new instruments, the side opens with a long passage of toy piano. Alongside occasional vocal interjections from Haino (singing in English), Ambarchi creates delicate textures on cymbals and metallic percussion while O’Rourke, for the first time in this group, performs on the EMS Synthi. With Haino joining in with his own electronics, the side eventually builds to a chaotic climax. Beginning with a sequence of “fourth world” drums and flute, the final side unfolds an epic build-up over a hypnotic foundation of pounding toms. Moving from flute to vocals to electronics, Haino eventually picks up the guitar in the second half of the piece, igniting a spectral blur over driving rhythms from bass and drums that eventually builds to a frenzied climax.