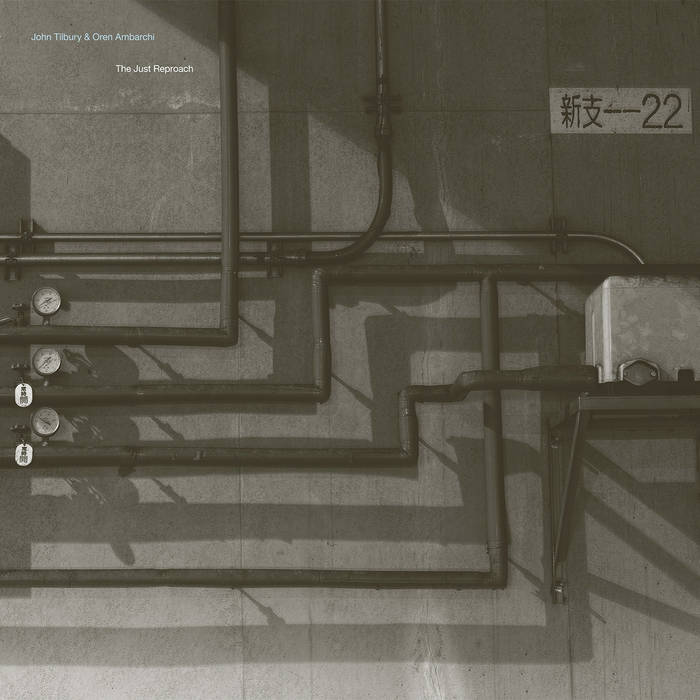 ms2 This work belongs to the same planet and atmosphere as Morton Feldman’s Piano and String Quartet – enough said :)

The Just Reproach documents the second concert given by John Tilbury and Oren Ambarchi as a duo. When they first performed together in Reykjavik, Iceland in March 2012, the aptness of the pairing was evident. When they reprised the duo at London’s Cafe OTO in September the same year in the concert presented here, the city was in the midst of a heatwave. With the air-conditioning turned off to accommodate the low volume of the performance, the uncomfortable squirming of the audience members in their sweaty chairs becomes, alongside the occasional dropped glass and cough, an additional sonic element in the duo’s performance, providing a randomised accompaniment to the duo’s careful exploration of tonal and textural minutiae.

As always, Tilbury displays a remarkable sensitivity and inquisitiveness, investigating the unique character of specific harmonic intervals through iteration and slight variation in a way that displays the same remarkable care for the individual sonic event that he found many years ago in Webern’s Variations for piano. In Webern, Tilbury found a freedom from harmonic context that allowed normally jarring dissonances to appear ‘warm, even sensuous’ because they were transformed into timbres, into pure sounds rather than relational harmonic values. This same concentration on every individual sound allows Tilbury to breathe new life into a tap on the piano’s strings, a simple sequence of descending notes or even a commonplace consonance. Indeed, there are moments of simple beauty in The Just Reproach that remind us that, in addition to his devotion to the work of Morton Feldman, Tilbury is also the major interpreter of the piano music of Howard Skempton, with its reduced folk-forms and static airs.

Ambarchi’s guitar does not simply provide the steady backdrop for Tilbury’s articulations that we might expect, but rather engages in a more complex interaction. Gentle swells of tones, sometimes supporting Tilbury’s iterations, at other times complicating them, alternate with occasional bursts of abstract electricity. Ambarchi constantly moves his sounds around between multiple amplifiers and a Leslie cabinet to produce a subtle yet environmental whole, interacting both with Tilbury and the sound of the room, edging forwards into a clear sonic presence before dispersing back into silence. Despite the hushed nature of the performance, Ambarchi’s signature sub-bass tones are not absent, but in fact form an essential part of the texture woven by the two musicians, taking on an ominous quality like the distant rumblings of a helicopter through the night sky.

Far from a simple exercise in reductionism, the reduced volume of the duo’s performance acts like a microscope focussing the audience on an incredibly rich palette of sonic details. Like in the late works of Morton Feldman, a seeming homogeneity to the proceedings reveals itself on closer inspection to be a ceaseless investigation and reconfiguration of sonic events, allowing the listener to move freely between the lushness and warmth of the sounds themselves and the questioning, non-linear forms Tilbury and Ambarchi spontaneously construct from them.