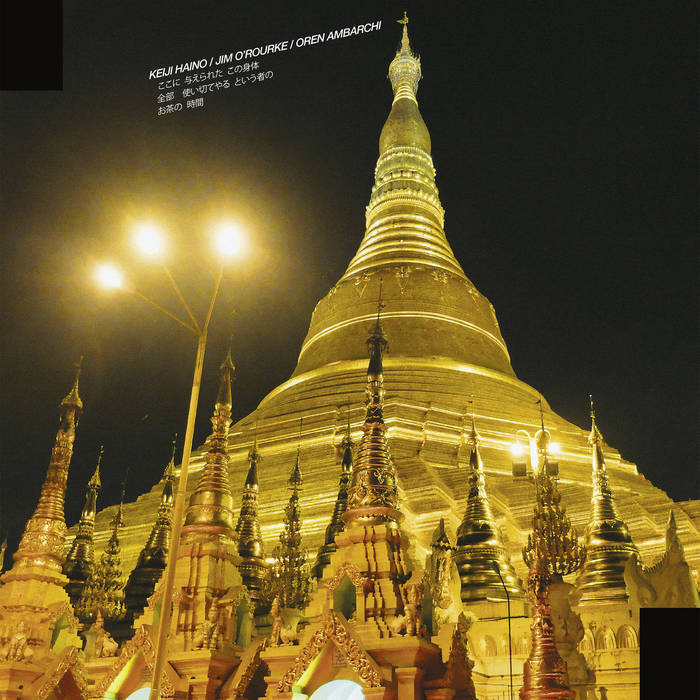 At this point, it can justifiably be said that Keiji Haino, Jim O’Rourke and Oren Ambarchi have become one of the leading groups in experimental music. This, their sixth release, presents the entire second set of the trio’s March 2013 concert at SuperDeluxe (the first set is available on Black Truffle as ‘only wanting to melt beautifully away is it a lack of contentment that stirs affection for those things said to be as of yet unseen’). While the first set of the evening saw the trio branching out into new instrumental configurations, here they return to their signature line-up of guitar, bass and drums.

The LP begins abruptly, with one of the finest performances by the trio captured on record thus far already in full swing. Throughout the course of this 12 minute piece, O’Rourke and Ambarchi lay down a thudding meterless pulse, the impossible midway point of Milford Graves and motorik Krautrock, over which Haino unfurls a number of distinct strategies developed in his work since the 1980s: formless blurs of reverb-drenched guitar noise, looped pointillist fragments and wandering, dissonant lines obscured in clouds of distortion. Continuing Haino’s habit of naming albums with phrases that seem to obliquely comment on the music they contain, it could definitely be said that this is music made by three people ‘determined to completely exhaust every bit of this body they’ve been given’. Showing the trio at new heights, this track carries on in the spirit of some of Haino’s greatest work: music made with the ingredients of rock that somehow manages to sidestep all of its forms and traditions while retaining and amplifying its fundamental power.

If this track alone lays to rest concerns about whether the trio has exhausted the guitar/bass/drums format, the remainder of the record serves as a demonstration of the multitude of possibilities still available for their continued exploration. The three are now so in-tune with one another that almost anything can be integrated into their improvisations: in the slow-burning second piece, O’Rourke’s heavily effected bass wanders from anti-music thuds to an almost funky passage with Ambarchi sounding not unlike Buddy Miles circa Hendrix‘s Band of Gypsys – it bespeaks the hours of listening to fusion and classic rock that continue to form an important part of O’Rourke and Ambarchi’s musical personalities.

The final piece is a continuous side-long performance that moves through a number of discrete episodes, from vocal and flute solos by Haino delicately accompanied by O’Rourke’s sparse bass and Ambarchi’s sizzling cymbals, to a final stumbling dirge over which Haino unleashes a stunning torrent of in-the-red guitar skree.

If you like Tea time for those determined to completely exhaust every bit of this body they've been given, you may also like: