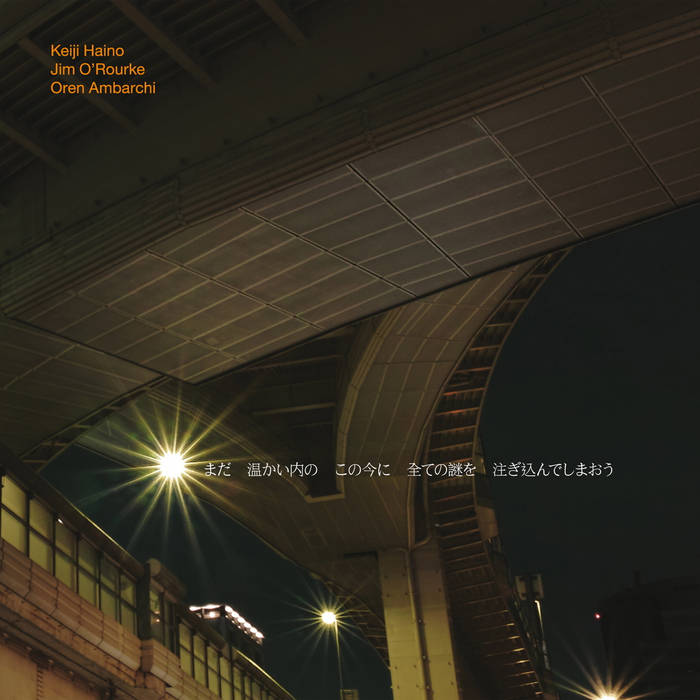 Following on from last year’s acclaimed Imikizushi (BT07), Now while it is still warm let us pour in all the mystery is the fourth release from the established power trio of Keiji Haino, Jim O’Rourke and Oren Ambarchi, recorded in January 2012 at their yearly concert at SuperDeluxe, Tokyo. While the trio’s two previous double LP releases featured sprawling, side-long performances, the music here is presented in six shorter pieces, each one displaying a different side of the trio’s interactions, from holy minimalism to cave-man rock.

The record begins with the trio joined by special guests Charlemagne Palestine and Eiko Ishibashi, conjuring ghostly tones from wine glasses as an accompaniment to Haino’s angelic vocals. This ten-minute piece, which moves from near silence and the sound of onstage footsteps to a stunning passage of clean guitar work from Haino, is steeped in the same mysterious atmospherics as Haino’s great folk-drone project, Nijumu. When Haino turns to the flute on the LP’s second track, a performance that clearly demonstrates the importance of the special concept of space and silence (ma) that Haino has developed from traditional Japanese aesthetics, O’Rourke and Ambarchi transform into the delicate and probing rhythm section of a classic 70s fusion side.

When the trio return to the crushing free-rock of their last two records, O’Rourke’s heavily effected bass rolling alongside Ambarchi’s tumbling rhythms as Haino’s guitar squeals and slashes above them, their performances display a new purposefulness and concision. Now truly operating as a band after a number of years of playing together, the pieces here feel like instant rock songs, O’Rourke and Ambarchi instantly locking into solid riffs over which Haino alternates between jarring no-wave chords, intense soloing and his signature vocalisations. When the trio slow down and stretch out, the rhythm section plods like an abstracted Crazy Horse on the brink of collapse, and Haino elicits long, mournful solos reminiscent of the first classic Fushitshusha double live LP.

Perhaps more accessible than the trio’s previous recordings because of its range and concision, Now while it is still warm let us pour in all the mystery exudes the dark, alien quality of Haino’s greatest recordings and testifies to the strength of the musical bond that has developed between these three players.

If you like Now while it's still warm let us pour in all the Mystery, you may also like: