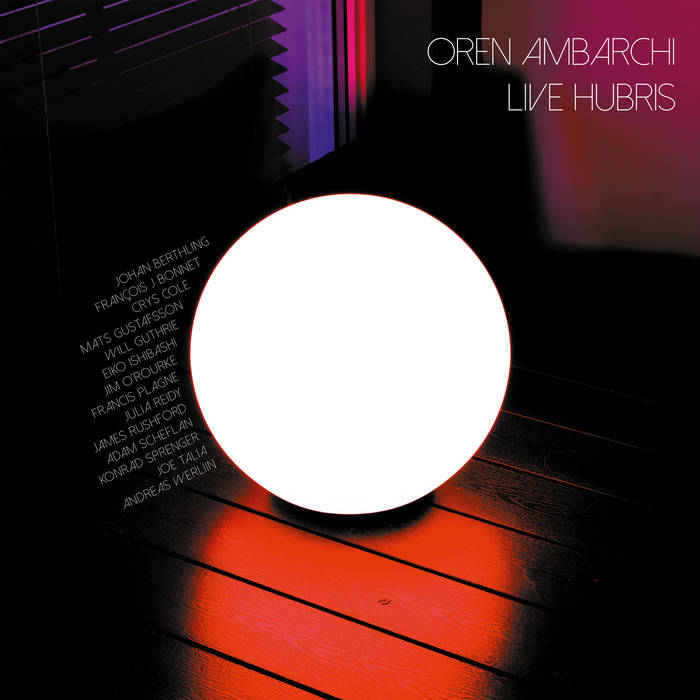 Black Truffle is pleased to announce Live Hubris, documenting the hypnotic and electrifying live performance of Oren Ambarchi’s 2016 LP Hubris by a fifteen-strong band at London’s Café Oto. Over three days in May 2019, Oto toasted Oren Ambarchi at 50/Black Truffle at 10 with Ambarchi and a large group of close friends and collaborators in a series of performances that interspersed existing projects with new collective endeavours, culminating with this: fourteen members of the extended Black Truffle family together on stage, joined by one special virtual guest, to translate the intricately studio-constructed layers of Hubris into a muscular live band workout.

Operating with only the bare minimum of pre-gig preparation after the planned afternoon rehearsal had to be wrapped up prematurely due to noise complaints, the gargantuan group lurches into motion with a 21-minute rendition of ‘Hubris Part 1’, powered by the pulsating electronics of Konrad Sprenger (the ‘ringmaster’ at the ensemble’s core) and no less than seven electric guitars spinning a web of intricately interlocking palm-muted polyrhythms. The layers of closely related but metrically distinct lines create ripples of shifting accents, flickering changes in emphasis that ricochet along the endless central pulse. Gradually building in density, this motorik continuum becomes the backdrop for the haunting tones of Eiko Ishibashi’s processed flute and an extended feature from long-distance guest Jim O’Rourke on guitar synth.

After the brief interlude of the second part, where Albert Marcoeur-esque guitar arpeggios accompany a halting attempt at phone conversation, the full ensemble gears up for the epic side-long rendition of ‘Hubris Part 3’. Now joined by the astonishing triple drum line-up of Joe Talia, Will Guthrie and Andreas Werliin, the layered pulse of the opening piece becomes a burning funk-fusion groove. Beginning on a medium simmer, the ensemble initially stick to its pulsating one-note mantra, over which Ambarchi unfurls a beautiful example of his signature shimmering Leslie-toned guitar harmonics, eventually joined by Ishibashi’s flute and some brooding, distorted dissonance from Julia Reidy’s guitar. Building steadily for the first nine minutes, the heat then rises dramatically with a first, gloriously loose chord change: with the all drummers now rolling and tumbling like a twice-cloned Jack DeJohnette circa 1970, Mats Gustafsson enters on baritone, his tortured roars and shrieks driving the band to peaks of insane intensity. Finally, the exhausted ensemble drops out, leaving only the jagged, skittering fuzz of Ambarchi’s guitar, brought to an abrupt conclusion at the command of crys cole.

Arriving on hot pink vinyl with artwork by Lasse Marhaug and an extensive selection of live photos by Ivan Weiss and Fabio Lugaro, Live Hubris brings this ambitious and outrageous evening of music to the safety of the home stereo.