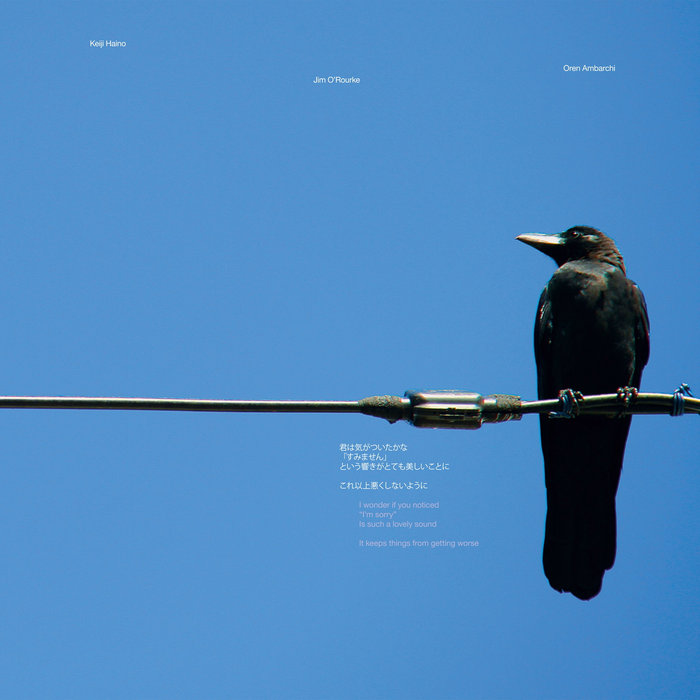 The remarkable series of releases from the trio of Keiji Haino, Jim O’Rourke and Oren Ambarchi continues with I wonder if you noticed “I’m sorry” Is such a lovely sound It keeps things from getting worse, which presents the entirety of an 80 minute set performed at Tokyo’s SuperDeluxe in March 2014. Where their 2012 performance (BT011 and BT012) was divided into two releases, one continuing their exploration of the guitar/bass/drums power trio format and the other emphasizing new instrumental configurations, the single extended performance presented here ranges widely over terrain both new and familiar, from acoustic strings and collective chants to thunderous power trio moves.

Throughout all of its transformations, the music here is some of the riskiest and most abstract the trio have yet committed to record. Beginning with chiming percussion reminiscent of Haino’s classic Tenshi No Gijinka, the first side is dominated by Haino’s impassioned vocals and performance on the bulgari, a traditional Turkish string instrument. Together with the woozy, sliding foundation of O’Rourke FX-laden bass and Ambarchi’s ritualistic percussion, the trio craft a sort of epic, abstracted song that moves through its spontaneous episodes with all of the fluidity of the best free improvisation.

After a haunting passage in which Haino’s voice, descending from angelic high notes to guttural growls, is accompanied only by O’Rourke’s roaming bass, Haino turns to electronics, gradually building a thick cloud of cosmic sludge as Ambarchi’s drumming goes into free fall. The end of the second side presents a special treat: Haino’s first recorded outing on the contrabass harmonica, from which he coaxes bizarre, wheezing textures against a backdrop of spacious bass and percussion. When Haino eventually picks up the guitar mid-way through the epic performance, the spaciousness and sense of volatility remain, with the trio often moving in an instant from crescendos of ecstatic noise to near-silence.

O’Rourke and Ambarchi rarely adopt here the classic rock roles essayed on earlier releases. O’Rourke’s bass, which takes centre stage surprisingly often, is sometimes so heavily processed by his array of pedals that it becomes a shifting electronic mass; at other times his roving chromaticism suggests a sort of fuzzed-out free jazz. Ambarchi spends much of the set exploring areas of tumbling free pulse; and even when he locks into a constantly repeated figure on the set’s third side, he gestures as much toward Ronald Shannon Jackson’s stuttering marching band funk as toward any classic rock moves.

When the trio finally move in the final quarter of the performance into an extended passage of rock riffing, the payoff is immense, as they craft a thudding one-chord epic reminiscent of some of the early Fushitsusha classics, before Haino returns to the bulgari, bringing the set back to where it began. Continuing to explore new instrumental and dynamic possibilities while remaining grounded in the trio’s previous work, this set also brings with it a unique pleasure for the non-Japonophone listener: for the first time Haino sings many of his metaphysically brooding lyrics in English.

If you like I wonder if you noticed ”I’m sorry” Is such a lovely sound It keeps things from getting worse, you may also like: